We have been having a lot of fun with hermit crabs over here. We have three in a 10 gallon aquarium tank. Of course it's just an old tank with a hood that we've had laying around for years, and I had planned on getting a mesh lid for it someday. When we first got the hermit crabs I saw a mesh lid that I really liked the local pet store. It was a bit pricey and I didn't have that amount of funds available when our initial hermit crab endeavor began. I think it was somewhere between 15 and $19. That wasn't entirely bad but it was more important that they had sponges for water and salt and food.
What I really liked about it was the hinged trapdoor in the top Which allowed you to reach in and change and add food or water etc. At a trip to Petsmart I saw one for a lower price that had just the standard mesh lid. I passed on purchasing it twice thinking that I really wanted that trapdoor... But the more I thought about it the more I realized that whenever doing something with the hermit crabs I really required a little bit more space than just a small trapdoor in order to reach inside and get what I needed. There was also no real risk of the crabs escaping when I was trying to work with them so I decided that the expense of the trap door really wasn't worth it. I went ahead and purchased the mesh lid at Petsmart and all the way home was thinking about how exactly I was going to wrap the saran wrap along with the new lid.
You see, anyone who is familiar with hermit crabs knows that retaining humidity is important for a correct habitat. Most books recommended that you add saran wrap to part of the top of the enclosure in order to retain moisture and get the proper humidity level in the tank. With experimentation I could tell that my humidity level (based on the gauge) would go way down if I removed the saran wrap but if I continued covering 1/2 to 3/4 of the tank with saran it would stay at the proper humidity level.
This morning I decided to get the new lid on the tank and work on my saran wrap. I went ahead and cleaned most of the tank and for the first time I used all-natural hermit clean spray.  It is an odor removal, cleaner and deodorizer and it smells like Lime. I really liked it! I used extra hot water and the spray to clean everything that I could remove easily.
I removed the large sand beach area of substrate and replaced it with coconut coir Substrate because one of the newer crabs was looking like he was beginning to molt (At least that is what the Petsmart employee said but to me he looks just like the other two!)
After adding a new crab yesterday, the crabs were incredibly active last night and in fact several times I heard noises from the kids room and went to check on them only to discover the crabs having a heyday in their tank. If you have crabs you know that they're nocturnal and they generally sleep during the day and play at night. Even so, I was not finding them to be incredibly active at night time...  With the exception of the occasional and very rare *clunk* of a shell on the side of the glass tank.
I had previously acquired a coconut fiber  climbing wall that was designed to encourage the crabs to climb and give them a place to play.  I had not installed it because I didn't want to give them a reason to climb without a lid but now that I had a lid I was very excited to put it in the tank... And also have a another item that would help retain humidity With a tank spritzing. 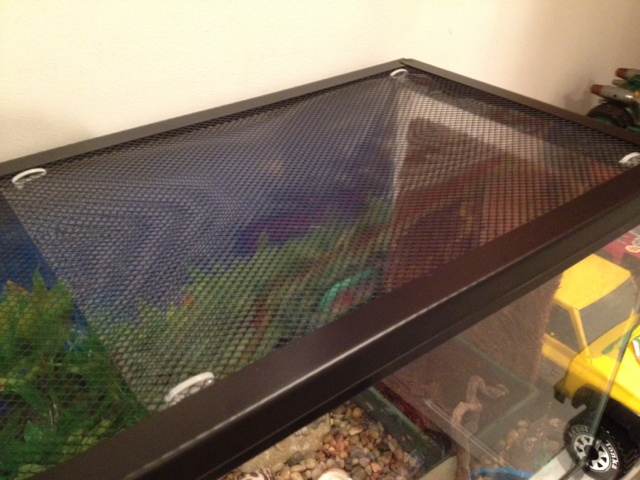 I actually got the idea to make the plastic on the lid be more permanent and less messy. I used a piece of thick plastic that you can purchase at Joanne fabrics in the home decor Fabric area. I always have this on hand because it comes in very handy for projects with sewing.
Ever since I've  had children I have purchased this in a very long tablecloth length section and kept it on our dining room table on top of all my cloth tablecloths. This makes for easy wiping after meals with small kids and allows them to do any project like Play-doh or painting or plaster crafts without worrying about destroying a tablecloth. It has been an absolute lifesaver and our table is never without it. Once the kids have basically destroyed the length of plastic, I will remove it From the table and cut the good sections apart to use as crafts. I keep sections of plastic underneath the fish tank, and kept the plastic on hand to use during our homebirth If necessary. I have used squares of it too sew into Ispy bags. It's just plain convenient and if you use a 40 to 50% off coupon you can get it for a discount that makes it very inexpensive. Generally a tablecloth plastic will last us about a year although in this case I've had this one on the table for nearly 2 years because I keep forgetting to pick up another one... It's not particularly immaculate anymore but it still serves it's purpose. Since I don't have the leaf in the table right now I had some overhanging about the width of a fish tank lid so I went ahead and chopped it off with the scissors knowing I'm getting a new one soon anyway. :) If I can remember! So anyway I trimmed the plastic down so that it would fit inside the under side of the mesh aquarium lid. I made it the same depth as the lid but about three quarters of the width... Because air needs to circulate to prevent the growth of mold, bacteria, and disease in their tank. I lay the plastic on the underside of the mesh lid so that you couldn't see the edges from the top and then I poked small holes in the plastic to correspond with the vent holes in the mesh of the lid.  Then I used very tiny zip ties that I had on hand to attach the plastic to the mesh in the four corners of the plastic. I trimmed off the excess edges of the attached zip ties and put the lid on the tank. Voila! Instant replacement for the saran wrap - that can stay on the tank constantly and wipes clean. You can see through it, it retains humidity, and it removes along withthe lid   to make it easier for the kids and myself to access the crabs to take care of them.
If I need to I can easily cut the zip ties and replace it with a fresh piece of plastic in the future. Black zip ties would probably provide a more seamless look but let's be honest I had clear ties on hand and it's an aquarium tank so it's not that big of an issue aesthetically :)
I hope that someone out there on the web sees this and uses my idea to create a mesh hermit crab enclosure lid for themselves! 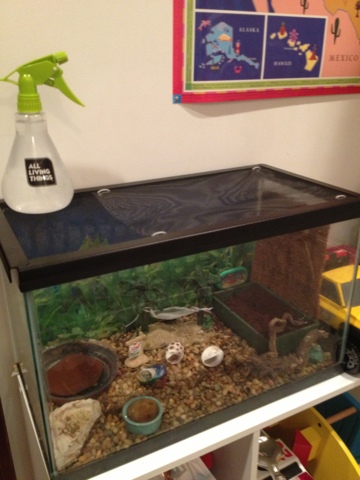